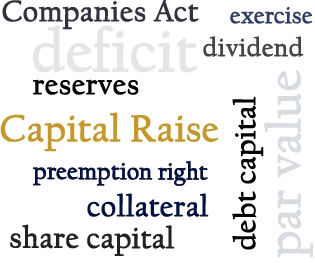 Companies can raise their capital through debt increase, otherwise known as debt capital, or share increase, also referred to as share capital. In this post, we look at how companies raise capital through selling more shares and how it affects share value. The funds for capital raise may come directly from investors, or from company reserves. Reserves refer to the amount of profit stored within the company rather than payed as dividend. The share value and the number of shares held by each shareholder differs in each case.

As explained in owner’s equity post, companies pay a percentage of annual profit to shareholders depending on the decision of the board in the annual general meeting, and keep the rest as reserve. This is the most available source for capital increase in case companies need more funds. Companies do not have to offer collateral for debt, or return interests for borrowed money. Since the accumulated profit belongs to existing shareholders, additional shares issued for the amount of reserves leads to an increase of number of shares for each shareholder, with a new share value that differs from the nominal value. In this case the value of company shares is determined suing the following formula.

If a company decides to raise its capital by %60, then the number of shares will increase by %60, but share value is divided among previous shares and new shares. For example, if the company in which a shareholder with 10,000 shares of 1000 Rials value, the general par value in Iran, goes through a %60 capital raise through reserves, the shareholder will have issued 16,000 shares of 626 Rials value. As a company continues to operate for some time, its share value is affected by the level of profitability it yields, and its market value determines the current value of the company’s shares.

Reserves are the most convenient source for a raise. However, they may not be available when a company needs more funds. In case there are no reserves within the company, it has to officially announce a capital raise and ask shareholders to provide the funds. Unlike the raise through reserves, this method of capital raise takes more time and presents certain challenges. Shareholders may be reluctant or unable to provide additional funds, which will threaten their position and power if new or other shareholders decide to invest. The company has to pay the face value per share to shareholders. It is also bound by law to take into account the right of preemption.

According to the law, shareholders with voting rights have the right to be the first to receive share offers in proportion to their existing shares. This is to protect their position within the company. Iranian readers may refer to section 8 of Iran Commercial Code for more information. Other readers may refer to their country’s Companies Act. In this case, share value is determined according to the following method:

If the example above were to raise capital through additional funds and offered shares based on market value, share value would not undergo any changes. However, if the company decides to make the raise based on a value lower than current market value, share values will differ for existing shareholders with preemption rights. If a company’s shares are values at 6,000 Rials in the market, and it announces a capital raise through additional funds by investors (%200) offering shares at 3,000 Rials, new share value and the value of the right of preemption is:

Existing shareholders can exercise the right of preemption to acquire 2 shares with the preemption right value per existing share. This makes the offer more appealing to shareholders. Eventually, the value of the shares of existing shareholders remain the same. Shareholders can exchange their preemptive rights for shares or sell the rights to others. It is also common for companies to offer shares for nominal value as well. The same method can be used to determine the preemptive right value and share values. Although the collective value does not change, market value may change after capital raise, affecting the value of shares as usual.

Capital raise through share capital is the most convenient method of acquiring additional funds. Capital raise may use nominal value, market value or a different value to offer new shares. Shareholders may exercise their right of preemption to maintain their position and power within the company by being the first to buy new shares.

Sources and uses of funds