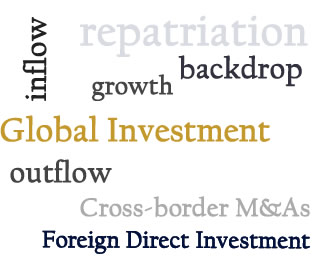 The UN reported a Foreign Direct Investment (FDI) drop of %19 in 2018 with %40 decline in FDI inflows to developed countries. The January 2019 report states that global FDI fell by %19 to $1.2tn while investment in developing countries managed to slightly increase by %3. Developing countries account for %58 of global FDI. China, Hong Kong, China, Singapore, Brazil, and India are among the developing countries that made it in to the top 10 host economies with the highest FDI inflows. The US still managed to remain the highest recipient of foreign investment in 2018, even though investment rates declined in compare to 2017. China and the UK followed the US respectively.

The most significant increase in FDI inflow belonged to Spain, a developed country with a rocketed FDI inflow of %269. Other developed countries in the top 10 are Netherlands and Australia. Australia’s inflow of investment was reported to have increased by %39 to $62bn, the highest growth among its category. As for developing countries, the highest FDI inflow growth belonged to India, the tenth country on the list. India’s foreign investment inflow was $43bn in 2018. All developing countries indicated a positive growth in FDI except Brazil whose inflow dropped by %12 to $59bn.

Cross-border Mergers and Acquisitions (M&As) plummeted by %85 in transition economies while they grew in developed and developing countries by %19 and %9 respectively in 2018. Europe M&As grew by %66 to $371bn, but M&As in North America declined to $240bn from $299bn. The report stated a significant drop of approximately %50 to $2bn in Africa. Latin America and the Caribbean experiences a positive growth of %32. Developing Asia grew by %3, continuing to remain the region holding the highest amount of cross-border M&As – $82bn. Cross-border M&As have been the highest in the past ten years, after the growth dropped from $1033bn in 2007 to $618bn in 2008. The value amounted to $822bn in 2018.

UN report states that FDI is likely to recover from the decline it experiences in the deepened regions in 2019. Greenfield projects increased by %29 in 2018, providing opportunities for investment in the following year. Certain forecasts macroeconomic backdrop may affect the outlook. Trade tensions, more strict global financing conditions, and vulnerable emerging markets are a number of factors that may affect future investments.

Developing countries FDI remained almost the same, but foreign investment in developed countries fell significantly due to US tax reforms. Although FDI declined in 2018, it is likely to rebound in 2019. However, certain factors such as trade tensions, and other uncertainties may affect investment flows in 2019.

1. The Organization of Economic Cooperation and Development (OECD) provides global direct investment statistics online. Use the link below to access FDI flows and describe the flow in the past ten years. (250 words)

1. In an audio recording answer the following question. (4 minutes)

Research your country’s FDI history. How has your country been doing regarding inflow and outflow of investment?