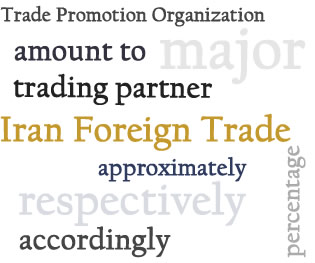 Iran foreign trade report in 2018 indicates that international trades continue to steadily grow in export and decline in the total value of imports. According to the Trade Promotion Organization of Iran, this country’s non-oil export in 2018 reached the value of $50.6 billion, having grown by 18 percent in comparison to the previous year. Iran’s import in non-oil items, however, declined by 10 percent to approximately $43 billion. Iran’s export has gradually increased over the past decade while imports has been decreasing since 2015. The country’s top non-oil trading partner is China, which accounts for %19.1 and 26.4 percent of Iran’s 2018 non-oil export and import respectively.

Iran’s foreign trade in 2018 improved by 18 percent in non-oil export, excluding exports of services. The top five countries receiving the largest share of exports are China, Iraq, United Arab Republic, Turkey, and Afghanistan. Exports to the first four countries are reported to exceed 50 percent of Iran’s entire non-oil export. The least percentage of value share among export destinations in the top 15 include Italy, Turkmenistan, Azerbaijan, and Taiwan. The highest and lowest export value among these countries were $9.6 billion and $352 billion respectively, with the lowest exported to Italy. Iran’s export consisted mainly of items such as gas liquidities and propane products, methanol, polyethylene, urea, ethylene glycol, and petroleum bitumen as well as those of related categories.

Similarly, 15 countries became major import origins in the annual foreign trade. About 35 percent of the entire import value belonged to China and United Arab Republic. South Korea and Germany’s shares in imports were 6.2 and 6.1 percent of total imports accordingly. Other countries such as Switzerland, France, Italy, India, Russia, and Netherlands were among the top 15 major non-oil import origins in 2018. China’s share of Iran imports were 26.4 percent as the highest import value, whereas imports from Brazil amounted to 1.3 percent of imports as the 15th top import origin. The top 15 countries held the largest share of imports- around 85 percent. Rice, barley, electrodes, animal corn, oil-cake, crude oil, and other goods were among the main imported products in 2018.

Iran’s non-oil export has been rising steadily whereas imports have been declining in the past few years. The majority trades are made with 15 countries in both exports and imports, however, the countries are not the same. While most export destinations are the neighboring countries, major imports originate from various countries around the world, including several European ones.

In an audio recording, present your country’s foreign trade in the previous year. Add your industry’s share in trades if available. (4 min)