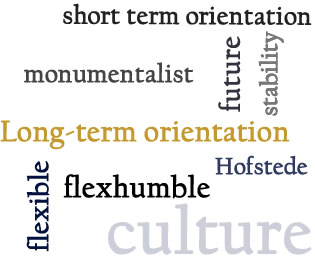 Long term orientation is the fifth dimension in Hofstede’s cultural model. It is defined as the extent to which a society looks forward to the future rather than resorting to the past to solve the problems in the present or the future. Making decisions based on past experiences and actions clearly has different implications in compare to looking forward in dealing with issues. Long term orientation shows how flexible a national culture is with regards to change. It also indicates the basis on which they make decisions. This dimension ranges from long term orientation to short term orientation, flexhumility to monumentality.

A society which scores low on this index is considered to have short term orientation, also known as being a monumentalist. Such societies look to the past to solve the problems they face in the present and to make decisions for the future. Stability is important to them, leading them to stick to conventions and to maintain a rather static and fixed mindset. Respect to tradition is of utmost importance, therefore, they may less plan for the future or prepare for it. Morocco, Algeria, Libya, Saudi Arabia, and Iran are among the countries scoring the least on this dimension, making them short term oriented.

On the other end of the spectrum are Russia, China, and Japan. They scored the highest on long term orientation compared to other countries, follows by Sweden, Norway and Finland. These countries are considered to be flexhumble. They consider it necessary to be ready for the future, as it is always changing. Long term oriented or flexhumble societies have a dynamic mindset towards the future. Relationships are considered valuable to them, leading them to lean towards long term relationships. More moderately scored national cultures on long term orientation tend to look backward and forward. They respect traditions, but they also prepare for the future. Among them are Australia, New Zealand, Canada, Argentina, Malaysia and Chile.

In an audio recording, provide answers to the following questions.